How Is The Bailey Bridge Assembled?

Bailey Bridge is one of the most popular and widely used bridges in the world.According to the actual needs of different span composition of various types and various uses of temporary bridge, emergency bridge and fixed bridge.It has the characteristics of less components, light weight, low cost, fast erection and easy decomposition.
Before assembling the bailey bridge, the truss must first be installed. The installation method is as follows:
1、The bailey trusses were first assembled on the rock, with one end of the trusses placed on the rock and the other on the temporary cushion.
2、pieces must be consistent, the first beam is placed behind the front vertical rod, the two rows of holes in the bottom of the beam are respectively set into the bolts on the lower chord beam plate of the two truss pieces, clamped with the beam clamp, temporarily not tightened, and tightened after the diagonal brace on the beam is installed. 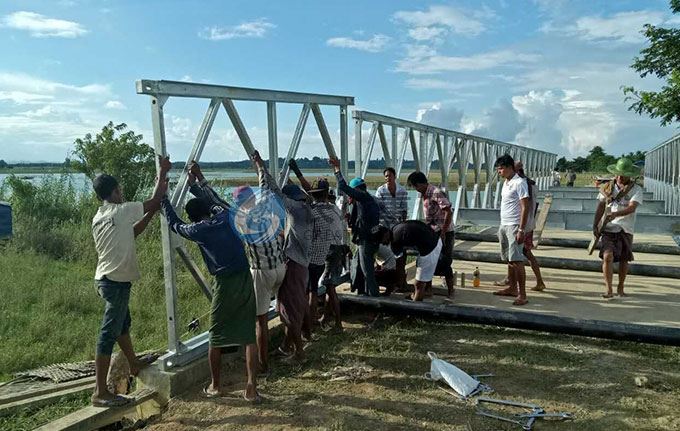 3、Install the second truss piece, and at the same time, the beret piece should be installed on the truss beam of the previous section, and the upper beam should be installed on the back of the vertical rod of the front end of the second truss, and the beam fixture should be gently clamped, temporarily not tightened, and then tightened after the diagonal support on the beam is installed.
4、Install the third truss and wind-resistant tie bars on the first truss piece and diagonal braces on the cross beam of the second truss piece. The nose frame installation is carried out in turn, and four truss pieces are required to be installed as the nose frame.
5、Bridge rolled out winch traction, traction process to achieve unified command, consistent steps, operation coordination. Check the operation of the roller and bridge at any time. If any abnormality is found, stop the operation immediately, and continue to push until the problem is solved.
6、The bridge has launched the winch traction, the traction process needs to be unified command, step consistency, operation coordination, at any time to check the operation of the roller and bridge, if found abnormal, should immediately stop the operation, wait until the problem is solved before continuing to push.
7、After pushing the bridge into position, remove the nose frame, place the lower chord on the bridge with jacks, check the bailey pieces and tighten all support frames, beam clamps, and wind-resistant tie rods.
8、Laying longitudinal Beam, bridge deck, steel plate, etc. .